Get fresh music recommendations delivered to your inbox every Friday.
We've updated our Terms of Use. You can review the changes here.

from Tomorrow's A Drag by War Party 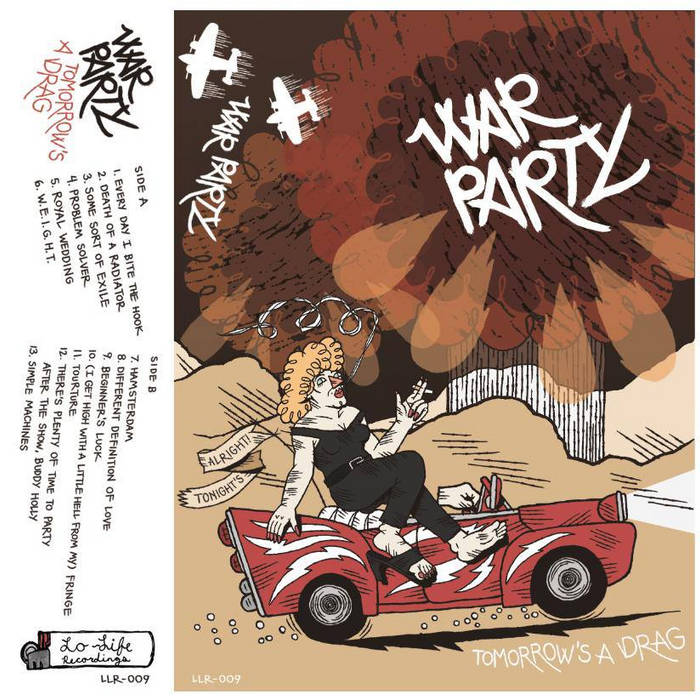 John and Jackie in their tower alone
just wonderin' what they're to do
with their wedding gifts
and their swollen red lips
and the pieces of their party, too.
Did he love her enough
Did she let him enough?
is that all there was to this affair?
It was a bottle of wine, a few sertraline
some sweaty fingers in her hair--
a love beyond repair.
But I know that they really want to make it in this world alone
Don't want a house, don't want a spouse, don't want a prayer,
don't want a job, don't want a car, don't want a trunk,
a doctor or accountant or lawyer, just beginner's luck.

You could be particle dust on the radio waves
long after your body is gone
and if you're not careful who you leave your estate to
coca-cola may one day own all of your songs.
Ziggy & Darby swore to just 5 years
but only one of 'em really told the truth.
Isn't it wild to think that you're wildest dreams
might be wild enough to finish you?
Oh this machine kills artists, too!
O but I know that you don't really want to make it in this world alone
You want a staff to prepare your food,
you want an audience whose eyes are stuck
and a stack of dead presidents, too;
You want beginner's luck.

Lo-Life is a DIY label from Fort Worth.
Lo-Life lets you download music from a lot of our releases for just a donation which could be as small as (but no smaller than) $0.00. Why?
Lo-Life loves you.